It’s not possible to wear on a mesh body tow or more texture semi transparent! (like lace texture or tattoo)

So when you buy a fashion applier (style semi-transparency) and if this fashion are send on the underwear or fashion layer you fashion look like this: 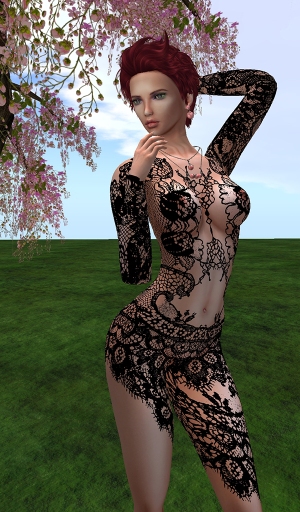 For have the good look result  you must active your layer in the Blending mod! 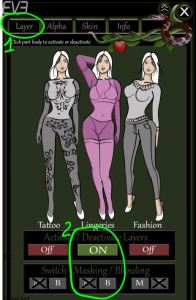 There are also a number of problems that semi-transparent objects cause on the hardware, such as not being able to discard fragments (or “potential” pixels) that are blocked from view before the renderer attempts to render them due to the nature of alpha blending. It’s also difficult to apply per-pixel lighting to these surfaces within the lighting & shadows renderer, instead requiring workarounds to apply the correct lighting to these surfaces.

As such, alpha blending should be used very sparingly, and avoided wherever possible.

Alpha masking (or alpha testing for those of you familiar with the more technical term!) is a technique wherein each pixel in a texture map is “tested” for if it’s above a specific threshold or not. If the test passes, then that pixel is rendered as if it were fully opaque. If the test fails, then that pixel is discarded, or otherwise considered to be fully transparent.

Alpha masking allows us to take advantages of many of the optimization techniques available to us on most graphics hardware, and these surfaces can receive full lighting and shadows with no need for any workarounds. They perform very well, but at the cost of having much sharper edges where pixels are transparent. Since alpha masking relies on a simple test for if a pixel’s alpha channel falls above or below a given value, varying transparency values are not possible with this technique.

Alpha masking is also not subject to many of the flaws of alpha blending, such as different sorting errors that can arise due to overlapping faces and objects. It’s handled much like any other opaque surface, either the pixel is opaque, or it’s not; there is no inbetween.

So which should I use?

Remember, your choice can have a significant impact on performance and quality of your content!

One thought on “Blending / Masking”

know all product compatible with our Mesh body, just enter
"EVEmesh" or "ADAMmesh"
in one word in the search on merketplace ,SL game, flickr, or web